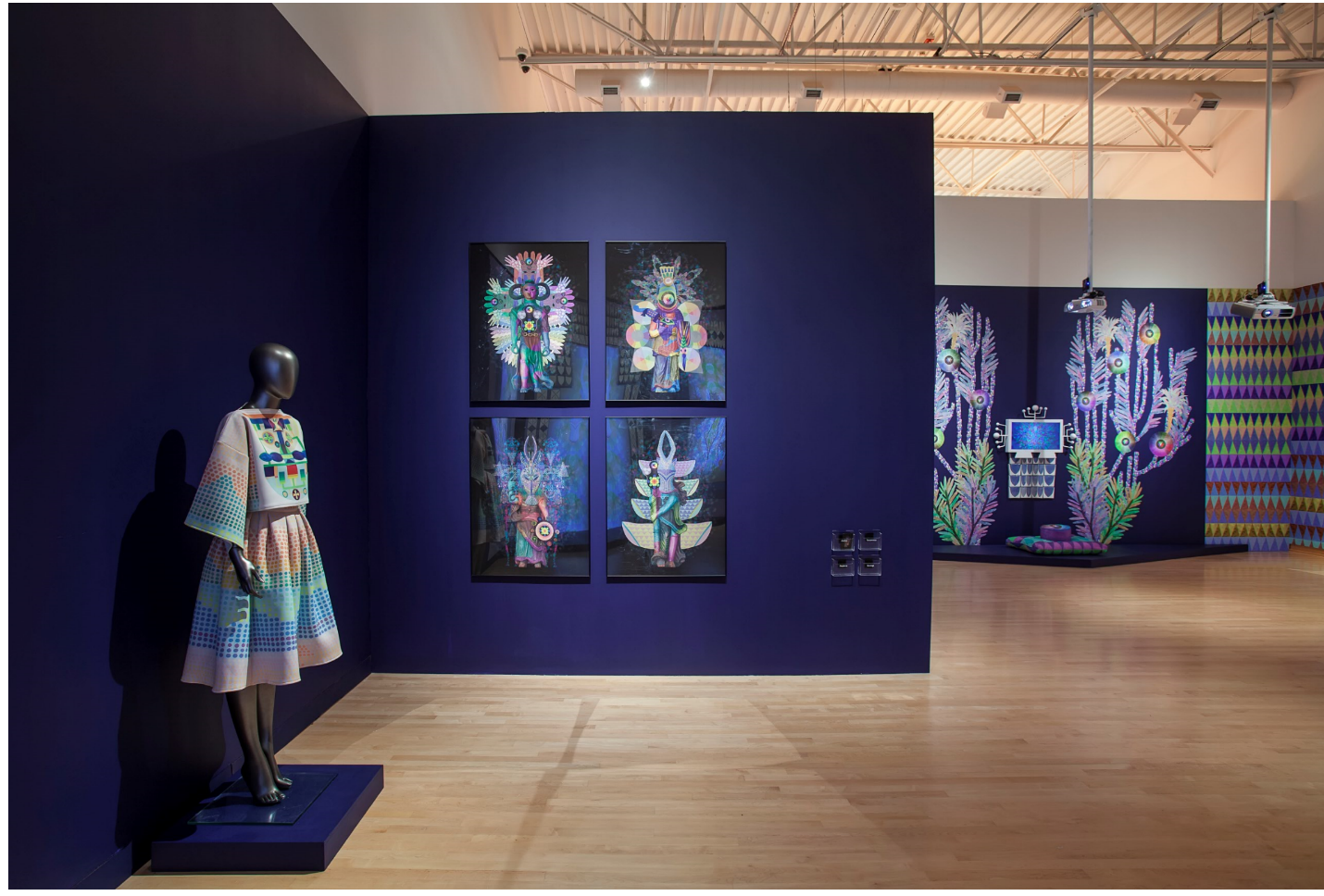 Chat with the Artist: Saya Woolfalk

Your overall project to date involves creating a parallel universe, complete with inhabitants, their own economic system, and so forth. This seems like a lot of responsibility! Could you tell us how you got started on this path of exploration?

When I started thinking about making art professionally, I was studying with feminist artists at Brown University and became invested in the idea that “the personal is political.”  I was inspired to explore ideas that impact me as an individual that might be of interest to others. I spent my time in school ingesting tools and exposing myself to things I could use to analyze real life. To consider race, gender and sexuality, economics, human consumption and its impact on the environment, the role of technology in shaping culture, as well as how museums work.

[In grad school,] I took as many classes as I could in multiple media to expand my material horizons: sculpture; painting; performance; video; art and tech. I also got back into my childhood obsession with reading lots of sci-fi and fantasy.

Part of the inspiration for this project is the figure of St. EOM and the utopian world of Pasaquan he created not far from Columbus. Tell us what interested you about St. EOM and how Pasaquoyan ideas or practices inform Augmented Visionary Reality Outpost.

When I first went to Pasaquan, it was the extravagance and intricacy of the site that blew me away. I was in awe of this Technicolor painted cement accumulation made by St. EOM and a few assistants as an addition to an ordinary house. I was also taken by the levitating figures and multiple cultural influences in the work. It was only after a bit of research that I found the meat of my inspiration.

In 1957, interracial marriage was illegal in twenty-four states in the United States including Georgia. This was the year St. EOM began to build Pasaquan. He built a temple to a culturally hybridized world in a place and time when many Americans were violently unreceptive to this perspective. My resulting installation is an attempt to create a space in the museum that can use some of the interactive strategies St. EOM used to communicate his vision of Pasaquan and a culturally hybridized world with the people who came to his complex.

Columbusites are very proud that visual artist Alma W. Thomas was from Columbus! In 2016, The Studio Museum in Harlem commissioned you to create a response to Thomas’ work. What was that like? Were you aware of Thomas’ work before that project?

I was aware of her work before they commissioned me to make the work. Curator Lauren Haynes invited me to respond to Thomas’s work and the piece I was particularly interested in is called ‘Apollo 12 ‘Splashdown’” (1970). I loved her colorful abstracted image of a capsule falling from space splashing into the ocean, a return to earth after a journey into the unknown.

The work I made in response is a fictional building called the Virtual Reality Outpost and uses her abstraction as a wall drawing in this building. This wall drawing was then transformed into a textile design for an augmented reality garment.

Do you listen to music or podcasts or other programming in the studio? What’s on your playlist?

I tend to listen to pop music while I am making work in the studio. Something with a good beat. I am often listening to Santigold or Janelle Monae. As for podcasts, right now I am listening to Nice Try, which in its first season explores different utopias including Herland, the Biosphere, and Oneida. These three utopias coincidentally have directly inspired No Place, The Empathics, and ChimaTEK. I am also listening to Sam Harris’s Waking Up course. His meditation is a part of my daily ritual to prepare for the studio.

What advice would you give to students in Columbus and elsewhere who are considering pursuing a career in the visual arts?

What is fantastic about studying art is that it prepares you to be creative, to problem solve, and to self-motivate, all of which are tools that can be used in many fields.

Being an artist can take many forms, but to become an artist who makes a living from their art is a real challenge. It can require multiple jobs, and being tireless in your pursuit. I personally spent many years without a permanent address, couch surfing, and going from residency to residency.  Even now I am constantly on the road for my projects. This may be appealing at first but it also can become quite exhausting.

The point is, really think about it. Are you committed to this? Do you really want to become an artist? If the answer is yes, then go for it!  If you have lingering doubts, they will probably amplify (and also sometimes subside), but you have to be able to live with the challenge of being an artist and still want to wake up in the morning and go to the studio to make art.