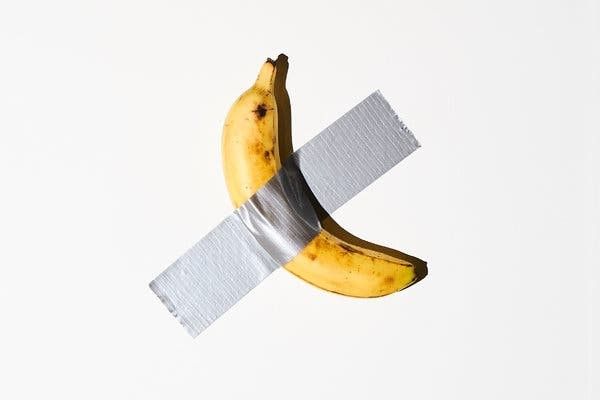 Photo courtesy of John Taggart for the New York Times

Every year, the art fair Art Basel Miami highlights important developments in contemporary art. Galleries from around the world gather to display and sell a selection of their artists’ works that best represents their gallery’s voice in today’s marketplace. This past December, Paris-based gallery Perrotin exhibited what would become the controversial face of the fair and a meme-worthy, viral sensation: a banana duct-taped to a wall entitled Comedian.

Maurizio Cattelan, the artist behind the readymade, is certainly no stranger to absurdist humor. He has spent his long career probing art’s ability to mock itself and others, creating golden toilets, waxworks of political figures, and sculptures of erect middle fingers. Yet Comedian seems somehow different from these other works, eliciting stronger reactions from viewers, ranging from high adoration to incredulous disgust.

But what is it about a banana taped to a wall that can create such a stir? 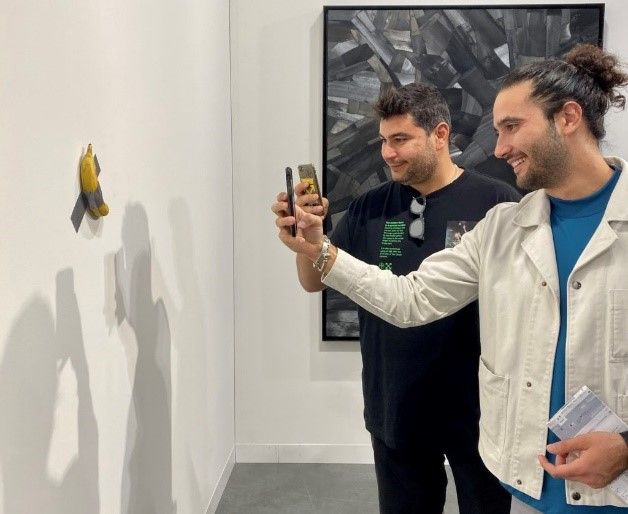 Most notably, it’s important to consider the role that context plays in Comedian’s story. While Art Basel Miami is certainly an admirable display of what artists and galleries are thinking about each year, it is also a costly endeavor in which to participate. Renting a booth at Art Basel—the Switzerland-based sister fair to the one held in Miami—can run from about $12,000 to over $100,000. When one adds in shipping, travel, accommodations, and other costs, one can imagine the financial strain participation can place on galleries. Galleries then attempt to sell their artworks—oftentimes to affluent attendees—in the hopes of fostering their artists’ careers, building relationships with collectors, and breaking even on their fair expenses.

To tape a banana to the wall at such a fair, then, is to call attention to the power imbalances inherent in the institution of art fairs. How is it that the basic purpose of an art fair—to celebrate the importance of art and promote the well-being of artists—has become so overshadowed by wealth? How is it that so many artists can be in such different income brackets than those who collect their work?

Even with all of this explanation and analysis in mind, there exists an ultimate line of questions. Is the artwork effective to those who simply see it without considering its context? Is Comedian another reason for the general public to feel alienated from an art world they deem self-important and pretentious? After all, aren’t we talking about a banana? 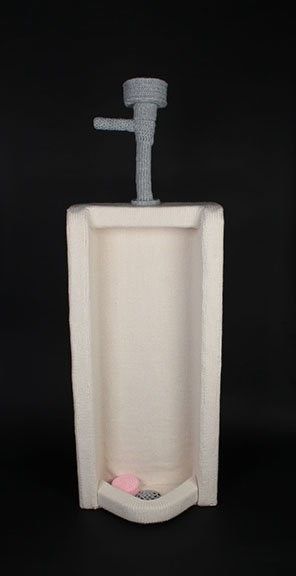 The answer to these questions perhaps most likely lies in what value people place in abstract or conceptual art, art that does not clearly depict its subject or the artist’s intentions in “realistic” or “apparent” ways. Take the crocheted urinal depicted here by Nathan Vincent. Those with an education in art history may see its reference to the 1917 sculpture Fountain and arrive at different opinions based on who they believe created the sculpture: Duchamp or Freytag-Loringhoven. Gay men may make reference to the role of public restrooms in queer history. Still others may get a laugh out of seeing a urinal in a museum.

Overall, in any given piece of art lies not a prescribed meaning, but an opportunity for the viewer to make meaning from their experience with the work. Art, then, is not just the object; the object is only part and parcel. Instead, art can be defined as the entire ecosystem of you, the artwork, its creator, intersecting contexts, and, most importantly, what happens in the space between all of these constituent parts.

So, we return to our question: is Comedian an effective artwork?

Well, it depends on who you ask and what attention they pay it. To those who take the time to sit with the artwork and the contexts around it, Comedian may be seen as an effective piece of institutional critique or as just another aggravating reminder of a historically male-dominated art market. To those who scroll through Instagram or read a clickbait headline,  it’s likely to be thought of as ineffective, if it’s thought about at all.

To say Comedian is to be dismissed because we “don’t get it” is analogous to turning away from someone purely because they seem “too different” from ourselves. In doing so, we place value on the work, its creator, and the art world from a place of judgment. Discernment, on the other hand, allows us to state something much fairer about a banana taped to a wall:

It’s just not the type of art I enjoy.

I might enjoy this piece more if the sculpture that kicked off the conceptual art movement were properly attributed to the woman who created it.

Surrounding Cattelan’s sculpture, institutional critique is performed by both those within the art world and those outside of it until we realize the folly in such distinctions. There is no “art world” and “non-art world,” no “insider” or “outsider.” There is only us, a community of individuals who decide—as Andrea Fraser puts it—what sort of “values we institutionalize, what forms of practice we reward, and what kinds of rewards we aspire to.”

By bringing this expansive understanding of communal relating to light along with its inherent, political tensions between judgment and discernment, authorship and valuation, perhaps Comedian’s truest role becomes that of a mirror, reflecting back to us even more than Cattelan intended. The sculpture brings into view the things we find despicable or repulsive about ourselves, others, and the dynamics between us. Comedian’s effectiveness simply lies in how closely we—including the artist—choose to look at what came before us and what surrounds and dwells within us today.