While the Museum is temporarily closed, we encourage you to view these objects in the object records by clicking the link below the photo.

SIGHT_SOUND is a new series that connects visual art and music. In each installation, curatorial assistant Ben French pairs one piece of art from the Columbus Museum’s permanent collection with a piece of music to explore the similarities and differences between the two art forms. Follow along on the blog, check out our YouTube playlist, and use #TCMsightsound to experience the museum in a new way. 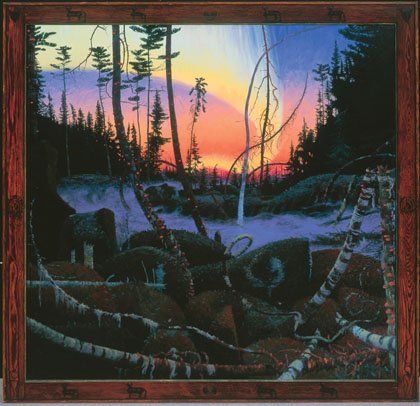 Tom Uttech
Wegimind Akaii, 1993
Oil on canvas
Museum purchase made possible by Norman
S. Rothschild in honor of his parents,
Aleen and Irwin B. Rothschild, G.1998.50

Both Tom Uttech and Justin Vernon of Bon Iver have spent most of their lives in Wisconsin and have profound relationships to the landscape of the region. Uttech explores the wilderness on foot and creates paintings from memory with the hopes that viewers will be moved to have their own personal adventures in nature. Here, in a painting whose title translates to “Mother Earth” from Ojibwa, the artist captures primordial rhythms and explores the mythic, potential presence of spiritual forces in the natural environment.

In 2006, after the end of a relationship and his band DeYarmond Edison’s dissolution, musician Justin Vernon moved to his father’s cabin in Dunn County, Wisconsin, where he began recording what would become Bon Iver’s first album, For Emma, Forever Ago. Since then, Bon Iver has explored notions of spirituality, temporality, and empathy through an ever-expanding array of instrumentation and lyrical approaches, all the while retaining Vernon’s respect for and gaze towards nature. In “00000 Million,” he sings, “I hurry ‘bout shame / and I worry ‘bout a worn path / and I wander off / just to come back home / turning to waltz / hold high in the lowlands.” Vernon joins with Uttech’s artistic and personal ideologies in these lines, positing that both nature and the act of creation can be generative spaces of confrontation, questioning, deep healing, and peace.