Women of the Permanent Collection

With the vernal equinox, March brings us the promise of warmer weather, flowers’ reappearance, and plenty of pollen. But it also brings with it important celebrations in the forms of Women’s History Month and International Women’s Day on March 8. To celebrate, let’s take a look at some of the notable women artists in the Museum’s collection. 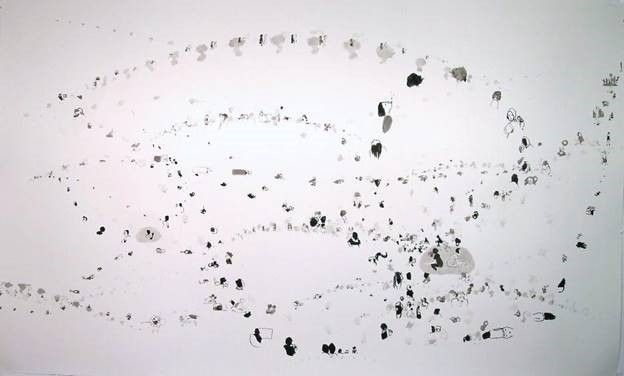 Amy Pleasant is a Birmingham, Alabama-based artist whose work is largely concerned with the human figure. Working between painting, drawing, and ceramic sculpture, Pleasant explores a language that the body belongs to as a sign or symbol. She utilizes an economy of line and color in order to succinctly record this language, chronicling what she refers to as “essential, universal motions and human behaviors.” In this drawing, a plethora of characters are seen in commonplace activities and poses. Dozens of small vignettes reveal a young girl catching raindrops on her tongue, a man sitting on a park table, and a child sleeping with a teddy bear. While this drawing illuminates the winding, cacophonous beauty of life, Pleasant’s more recent work takes on an almost meditative quality in its simplicity. By performing this distillation, the artist is able to view the human body and its linguistic qualities across macro and micro scales in order to uncover its emotive, communicative abilities. 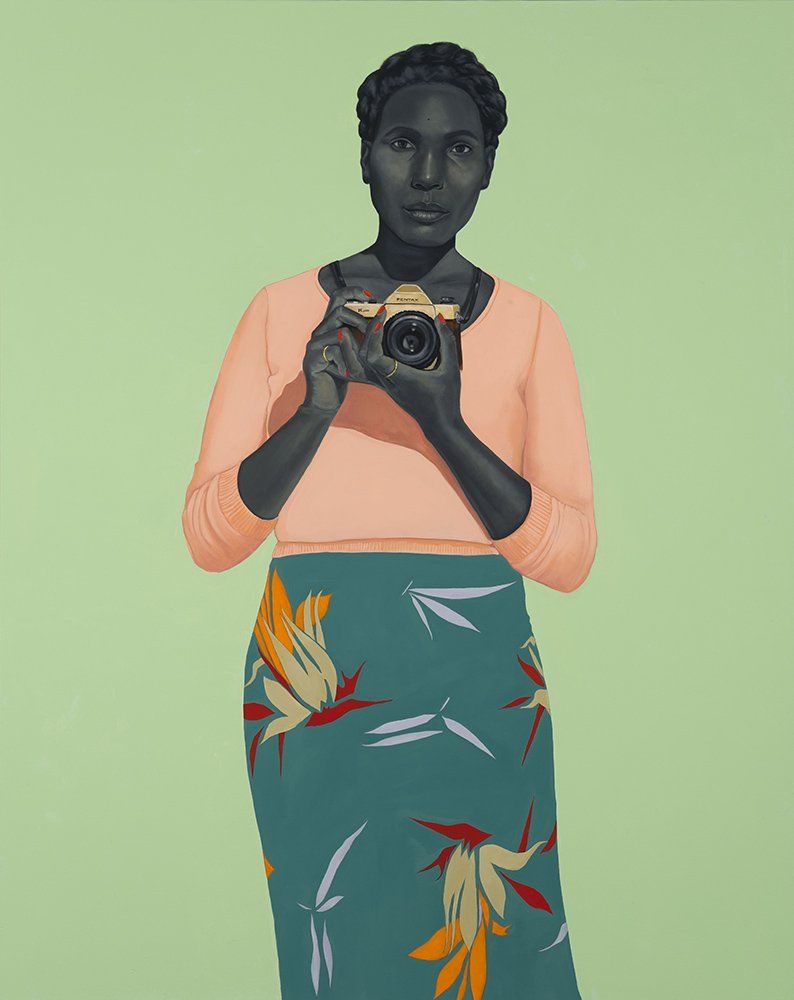 What's different about Alice is that she has the most incisive way of telling the truth, 2017
Oil on canvas
The Fund for African American Art G.2017.10

Columbus native Amy Sherald has received much attention in the past few years after completing Michelle Obama’s portrait for the National Portrait Gallery in Washington, D.C. Known for painting skin tones in grayscale, Sherald challenges our conception of color as a representation of race, thereby liberating her subjects from pervasive stereotyping and profiling. She explains, “I want people to be able to imagine life outside of the circumscribed stereotype or identity that can be controlled by many circumstances such as your environment, your parents, your friends, your skin color, your class, etc. Imagination allows you to bend the rules of the temporal world. I just want them to see that a more beautiful world exists beyond the confines of your environment.” 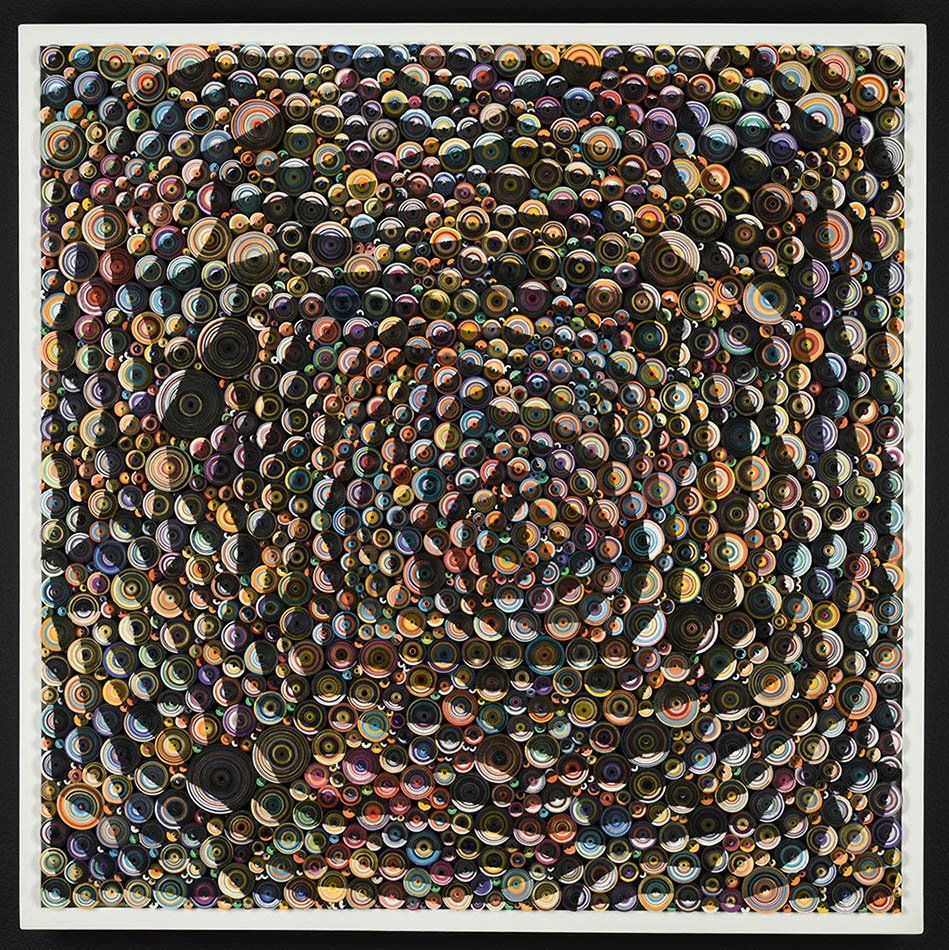 This work by Iranian American artist Hadieh Shafie is not only a dazzling spectacle of color and depth but also a container for a unifying secret. On the unseen interior of each roll of paper, the artist has handwritten and printed the Farsi word eshgh, which equates to the English “love” or “passion.” Shafie often returns to this play between what is visible and what is hidden in her work, drawing inspiration from her homeland’s 1979 revolution, when the government censored many texts. Shafie’s interplay between language and image also reflects her interest in the arts of the Muslim world, including calligraphy and patterned tile work. Overall, her work emphasizes not only the beauty of language and Iranian culture but also the political importance of their presence in the world. 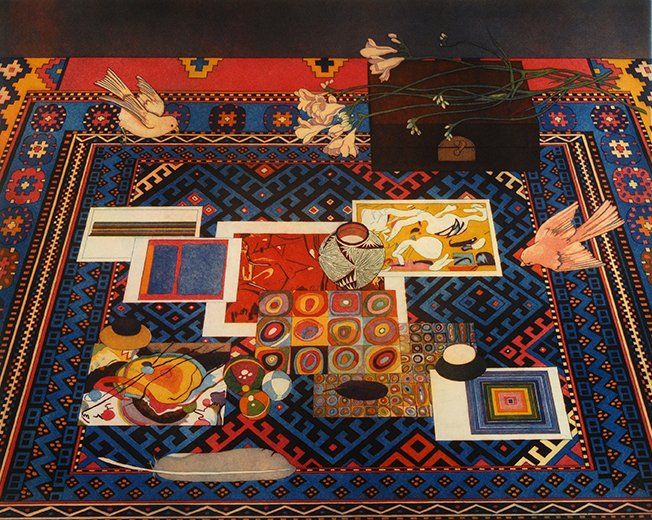 Katja Oxman’s multi-plate aquatint etchings depict complex still lifes of oriental rugs, upon which lay thoughtfully organized spreads of treasured objects belonging to the artist. The composition’s aerial viewpoint complicates the beholder’s notion of position; the objects in Oxman’s works almost seem to levitate off of the rugs and emanate a sense of calm. Oxman takes inspiration from both the rich, earthy colors of the Japanese woodblock printing tradition and the poetic works of Emily Dickinson. The artist often adopts lines from Dickinson’s poems to use for her titles, which hint at the secret, personal meanings of her works.

To commemorate the impactful efforts of women throughout American history, the Columbus Museum will be hosting Farm to Table(aux) on September 17. An evening of celebration to raise funds for the Museum’s ongoing effort to bring American art and history to life for the communities of the Chattahoochee Valley, the event will feature a farm-to-table feast prepared by celebrity chef Alex Hitz alongside live music and Artistic Tableaux Vivants come to life. For more information, please visit the event’s website.