In connection with the regionwide celebration of Fort Benning’s centennial year, Fort Benning at 100 spotlights the base’s history in the Columbus Phenix City area. Artifacts from the Museum’s permanent collection, including many recent acquisitions, will illuminate the post’s founding in the fall of 1918 and early development before its explosive growth during World War II. The base is especially notable as a training location for several schools, including the Infantry, Airborne, Rangers, Officer Candidates, and now the Armor. Fort Benning’s continual evolution throughout the 20th and early 21st centuries, often mirroring the United States’ shifting military practices and priorities, and its place in today’s U.S. Army will be examined. Soldiers’ interactions with local civilians will be a focal point, whether Columbus’ 1940s status as “Mother-in-law of the Army” or today’s collaborative working relationships between the post, city governments, businesses, and nonprofit organizations.

Fort Benning at 100 is generously sponsored by Mr. and Mrs. Jerry B. Newman. 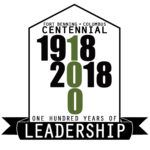