The celebration of Juneteenth, or Freedom Day, is unique to the southern states as it celebrates the emancipation of enslaved African Americans. June 19, 1865 specifically commemorates the announcement of the abolition of slavery in the state of Texas.

The Columbus Museum’s Collections team has unlocked the vault to show an amazing piece for the permanent collection. An  1877 illustration from Frank Leslie’s Illustrated Newspaper shows an emancipation celebration held in Charleston, South Carolina.

“The illustration is a wonderful combination of the dual mission of The Museum of depicting regional art and history,” explained Aimee Brooks, Museum Collections Manager. “It also shows a celebration in the Charleston, which is interesting because it’s where the Civil War started.”

In the illustration, African American soldiers are seen clearly with “U.S.” military belt buckles. There is also an African American fireman in the center and at least one woman represented on the far right. 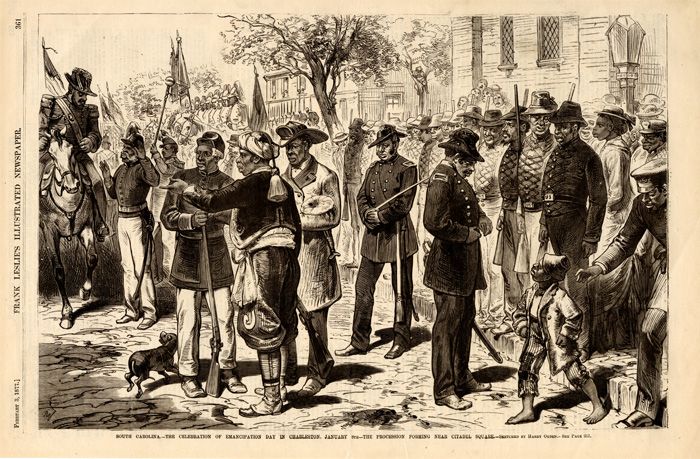 Take a look at our other emancipation items from our collection below.

The History of Juneteenth

Did you know the Texas was the first state to declare Juneteenth a holiday on January 1,198o, then other states followed.Learn more about the history of Juneteenth and how its celebrated today from the video below.